By Matt McGrathEnvironment correspondent, BBC News
2012 has seen large numbers of wind turbines installed all across the US.
Continue reading the main story
US energy companies are racing to install wind turbines before a federal tax credit expires at the end of this year.

Experts say that wind power has exceeded the construction of natural gas plants in recent months.

However the financial incentive for wind could be lost as congress struggles to avoid financial deadlock.

Even if the credit is extended it is expected that new installations will decline in 2013.

According to industry analysts, the federal government's production tax credit has played an important role in the expansion of wind energy across the US since it was first introduced in 1992.Wind passes gas

At that point there was less than 1.5 gigawatts of power generating capacity provided by wind across the country. That figure has grown dramatically. This year has seen around 12 gigawatts of wind power capacity installed, outpacing even natural gas projects which have boomed on the back of cheap shale.
Continue reading the main story
“Start Quote

The government subsidy works out at 2.2 cents per kilowatt hour of power produced over ten years. This amounts to around $1m (£620,000) for every large turbine. However the deadline is absolute - to get the money the blades on new installations must be turning and generating power before the 31st of December.

"There's a lot of rushing right now to get projects completed by the end of the year," says Rob Gramlich, senior vice president at the American Wind Energy Association.

"It is not a great way to run a business with this policy-induced uncertainty."

The tax credit has proved contentious with some lawmakers criticising it as too generous. It lapsed previously in 1999, 2001 and 2003. Each time it lead to a collapse in new construction.

The American Wind Energy Association are hoping the tax credit will be passed as part of a compromise package of legislation to help the US avoid the so-called fiscal cliff. The say the most likely outcome is a short term extension of the subsidy.
The federal financial subsidy is around 30 % of the cost of a large turbine.

"There's a good chance we could get this extension, it is very hard to predict, but the industry is not making bets on the Congress getting it done," says Mr Gramlich,

Even if there is an extension there is likely to be a significant curtailment of wind installations in 2013. Wind energy companies say they need longer time frames to negotiate deals to sell the power they generate.

Iberdrola Renewables is the second largest developer of wind power projects in the United States. The company is racing to finalise new wind installations in Massachusetts and New Hampshire.

However the prospects for new turbines in 2013 are slim according to Paul Copleman, communications manager for Iberdrola.

"Even if the tax credit is extended, our new construction plans likely will be ramped back substantially in 2013 compared with the last few years. So much time has passed without certainty that a normal one-year extension would not be a game-changer for our 2013 build plans."

Some analysts argue that all subsidies to wind should end and the industry should stand on its own two feet. They say that the current arrangements mean that energy companies continue to make money even when there is a surplus of wind and the market price is negative.

Dan Kish is with the Institute for Energy Research, a body long critical of subsidies for renewables. He told BBC News the extension of the tax credit was expensive, unnecessary and destabilising to the electricity grid.

"Wind produces power at a fraction of its stated capacity, and is increasingly adding unnecessary costs to consumers, just as it is in the UK," he said

"They are creations of government and serve only to make their builders and owners wealthy at the expense of the public."
Publicado por Unknown en 19:30 No hay comentarios: 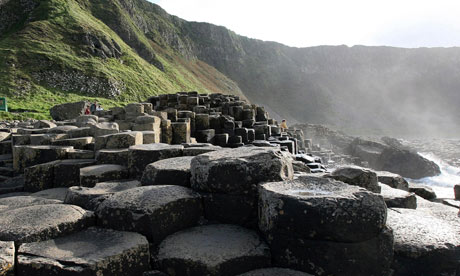 The National Trust is against plans for a golf course at the edge of the Giant's Causeway in Northern Ireland. Photograph: Paul Faith/PA

Conflict is synonymous with the Giant's Causeway. Children in Northern Ireland are weaned on the legend of how its rugged landscape was formed when the giant Finn MacCool confronted his Scottish rival, Fingal, by hurling rocks into the sea.

A more prosaic, but no less violent, explanation for the causeway's genesis attributes the creation of its 39,000 hexagonal, basalt stones to a series of volcanic eruptions 60m years ago.

Now the causeway is at the centre of conflict again. The National Trust, one of the UK's most formidable campaigning organisations, is seeking to thwart the development of a £100m golf course on the edge of the causeway, Northern Ireland's only Unesco world heritage site.

The trust, which is charged with protecting the site, is using a judicial review to challenge the Northern Ireland government's decision to grant planning permission to a five-star resort that will boast a clubhouse, 120-bedroom hotel and 75 guest suites.

With its potential to create hundreds of jobs, many see the development of the Bushmills Dunes golf course as a major regeneration project. But the trust disagrees, on the grounds that the course, which would be 500 metres from the causeway, lies within a "buffer zone" that Unesco, the UN's heritage watchdog, says must be protected.

Now the looming legal row, which is due to commence on 9 January, could become a defining event for Northern Ireland, one that says much about how it sees itself.

Hundreds of thousands of visitors pour on to the causeway each year to marvel not only at the site, but at its breathtaking views all the way down to Donegal and over to Scotland's Mull of Kintyre, 16 miles away. One enthusiastic visitor was the prime minister, David Cameron, who went during the Olympics and talked of how tourism could help to secure Northern Ireland's prosperity.

But how this vision is to be realised lies at the heart of the row, one that will have consequences not just for the causeway but, potentially, for the UK's other 27 Unesco-listed sites.

After the opening of the acclaimed Titanic Belfast centre in the spring, the row over the right to fly unionist flags has given an ugly, sectarian turn to the end of the year, and now Northern Ireland stands at a crossroads. In its past it sees a poor country blighted by the Troubles, but rich in history, folklore and natural beauty. In its future, it sees potential to become a modern nation exemplified by the success of its golfers, including 2011 Open champion Darren Clarke and the current world No 1, Rory McIlroy.

These two, along with former US Open winner Graeme McDowell, have done much to put Northern Ireland on the golfing world's map. But Bushmills Dunes, say its supporters, would take the country into a different league. Alistair Hanna, the New York-based developer behind the scheme, talks passionately about its potential to make Northern Ireland the "gold standard" in links golf. The course's designer, David McLay Kidd, has promised Hanna: "If I can't get your course into the top 50 of the world, you should shoot me."

The development would see a desolate place of dunes and scrub that looks out to where the North Atlantic melds with the Irish Sea replaced by lush greens and a labour-intensive landscape, at odds with the natural environment. James Orr, of Friends of the Earth, has likened the development to "a drive-through burger bar at the Taj Mahal".

Inevitably, parallels have been drawn with the controversy that surrounded Donald Trump's £750m golf resort in Aberdeenshire, with Hanna playing the part of the unloved US billionaire. But the comparisons with Trump can be overblown. A former McKinsey consultant and Harvard graduate, Hanna was born in Northern Ireland and has many friends in the province, which he still visits regularly.

The majority of local politicians and businessmen seem to be behind the plan. Ian Paisley Jr, a Democratic Unionist MP, described the trust's opposition as a "disgrace to Northern Ireland". Golfers are also supportive. Clarke has attacked the trust for trying to block a project that he said would create 360 jobs for the local economy.

Paisley claims that the row has already prompted one potential financial backer to look elsewhere.

The trust, which has four million members around the world, is acutely aware that its decision to take legal action is controversial and almost unprecedented. But Heather Thompson, National Trust director for Northern Ireland, claims the trust had no choice: to walk away from the fight would have been a betrayal of its core beliefs and detrimental to the long-term success of Northern Ireland.

"This issue is wider than about Ireland and even the UK," she said. "It's about how we use the resources we have today to ensure future generations have similar opportunities."

Unsurprisingly Hanna, an evangelical Christian, has been critical of the trust's actions. "Those who instigate judicial reviews cost taxpayers money and slow down development, despite knowing the process can't improve the decision," he said on Twitter.

Northern Ireland's environment minister, Alex Attwood, has argued that the tensions between economic development and respect for landscape can be resolved. Approving Bushmills Dunes, he said it would "be accompanied by stringent conditions which will mitigate the impacts of the development on the ecology of the site and the local landscape".

But doubts linger. Northern Ireland already has more than 80 golf courses. Several are in administration and others have declining memberships. The new development would be adjacent to a nine-hole course and only a few miles from neighbouring Royal Portrush golf club, where the Irish Open took place this summer.

Critics say that Northern Ireland has learned nothing from the painful lessons of its over-reaching southern neighbour. The "Celtic tiger's" building boom saw a glut of luxury developments, but the ensuing bust has left many lying empty.

However, their opponents say the problem is not over-development, but lack of development. The economy in Northern Ireland is flatlining and jobs are scarce. Last month Patton Group, one of Northern Ireland's oldest construction firms, called in the administrators. Samson and Goliath, the massive cranes operated by Belfast's famous shipbuilder, Harland & Wolff, are in danger of becoming little more than tourist attractions as the global economic turmoil continues. And despite Cameron's hopes for a tourism bonanza, the number of people visiting the country fell by almost 12% this year, an alarming drop given the substantial PR campaign that was employed to draw people in during the Olympics.

At a time when Northern Ireland desperately needs good economic news, many hope it will find salvation in its fairways. The trust, by contrast, fears the seductive arguments of golf mania could result in the country failing to protect its most valuable asset. The irony is not lost on Thompson. "We've spent so much time fighting over the land," she said. "We really need to look after it."
Publicado por Unknown en 19:28 No hay comentarios: