Full facts of disease are being hidden from public, say critics, as nurseries hit by deadly fungus complain about being identifiedSharel 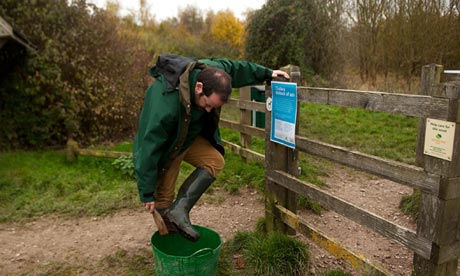 Nurseries infected with the deadly fungus set to wipe out Britain's 80m ash trees have been removed from the official map of the outbreak the Guardian can reveal, after nursery owners complained that being identified might hurt their business.

Officials said permitting anonymity encourages nursery owners to come forward and report infections, but critics say concealing the identity of infected nurseries means the public and scientists trying to fight the epidemic do not have the full facts.

The owner of one of the nurseries affected by ash dieback said locations should be published. Judy Davey, who runs the Perrie Hale Forest Nursery near Honiton in Devon, said she had publicised the fact that an infected ash plant, bought from another UK nursery, had been discovered.

"We decided to take the bull by the horns," she said. "We wanted people to know we were controlling this disease."

Davey has had to destroy 7,000 disease-free saplings grown at her nursery as there is no longer any market for ash trees.

Dr Stephen Woodward of Aberdeen University, one of the UK's few tree pathologists, said: "You are potentially missing some information. They should be mapped, but I think there may be political difficulties. Nurseries are a bit sensitive and it gets in the way of trade."

The official data from the Forestry Commission lists 309 infected sites across the UK. But only 292 of these sites are shown on the commission's map of the spread of the infection. These include 132 sites where infected trees from nurseries were recently planted, while the remaining 160 sites may have been infected by fungal spores being blown across from continental Europe. Seventeen infected nurseries are not shown. Versions of the map published in November briefly showed the location of 13 known infected nurseries, but these have since been removed from the website following complaints from the industry.

A Forestry Commission spokesman said: "We responded to concerns from nurseries that the information on the maps could be used to identify them and had the potential to harm the business of those who have done the responsible thing and reported cases of the disease at those nurseries. The risks posed to the wider environment by infections on commercial premises are very low because of the swift control action taken."

Earlier in December, the environment secretary, Owen Paterson, said the policy of tracing infected young trees – which has seen more than 100,000 destroyed – was "unlikely to be sustainable in the longer termand there may be benefits from a more targeted approach".

Professor Ian Boyd, chief scientific adviser at the Department for Environment, Food and Rural Affairs (Defra), said control measures had to be "proportional" to ensure trade could continue and deliver "economic uplift".

Paterson said in November that the Chalara fraxinea fungus that causesash dieback would be impossible to eradicate from the UK: in Denmark it has now infected 90% of trees.

"It is vital that scientists and the public have the full facts to tackle the spread of ash dieback," said Mary Creagh, Labour's shadow environment secretary.

She said officials had altered key material on ash dieback before, whenchanges were made to the "scientific facts", emphasising the role of the wind in spreading the disease over the role of imports from continental Europe.

Creagh said: "Now, nurseries which imported infected plants have been removed from the map. Sadly this is further evidence of the huge ministerial incompetence at the heart of Defra."

Defra and the Horticultural Trades Association declined to add to the Forestry Commission statement.

Dr Robin Sen, an expert in fungi and trees at Manchester Metropolitan University, said: "We have to be very careful about apportioning blame to nurseries. If information is being kept from the public, I am sympathetic to that worry. But we will need the nurseries as they are going to be very important in restocking woods" if varieties that are resistant to ash dieback become available.

Davey, whose nursery is in its third generation of family ownership, said the overall impact on the business "has not been as bad as we feared".